Starting with version 1.1.0 alpha-22, appleseed ships with a new command line tool called makefluffy. The purpose of this tool is to grow hair (“fluff”) on any appleseed scene or part of a scene. It is useful to quickly generate a lot of curves in order to test performances and robustness of appleseed’s curve rendering.

We call fluffification the process of applying makefluffy on an object.

makefluffy has a number of required and optional command line arguments. The general syntax is as follow:

In addition to the usual command line options shared by all appleseed command line tools (--help, --version, etc.), the following options are available:

Required. Set the number of curves to generate per curve object.

Required. Set the base length of the curves. This value is expressed in object space.

Required. Set the width of the curves at the roots. This value is expressed in object space.

Required. Set the width of the curves at the tips. This value is expressed in object space. One will usually want the tip width to be smaller than the root width. A good starting point is having tip width = 1/10 * root width.

Optional. Set the amount of curliness of the curves. A value of 0 will result in perfectly straight curves. The default value is 1.5. Values greater than 1.0 are then obviously allowed.

Optional. Set the number of presplits, i.e. the number the times curves should be split (in half) when inserted into the object. Splitting curves will result in a larger memory footprint but potentially faster rendering. The default value is 0 (no presplits).

It can be useful to increase this value when generating long, highly overlapping curves. Start with low values (1, 2, etc.) and check memory usage and performance increase. Values above 5 or 6 are suspicious.

Optional. Grow curves for a subset of the object instances in the scene, as defined by a regular expression following the Perl syntax (cheat sheet, examples). The default value is .* (all object instances are included).

You will probably want to exclude a number of object instances from fluffification, such as mesh lights. For instance, if the mesh lights of your input scene are named light1, key light, ceiling_light, etc. you can exclude them all at once by using 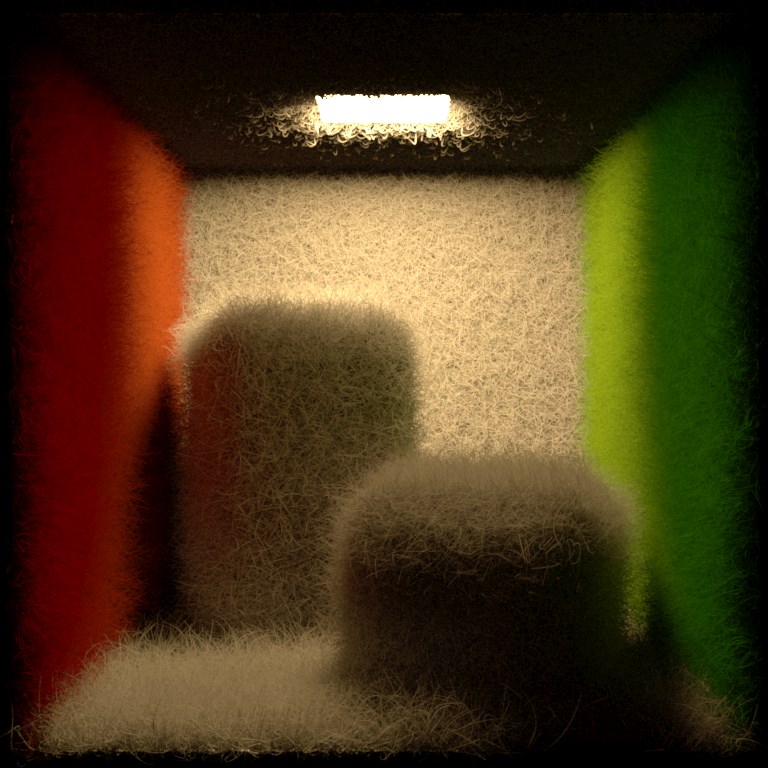 This image contains 2.8 million curves and was rendered with spectral rendering using measured data from the official Cornell Box specification.

The scene that produced this image was generated using the following command line:

where the source scene, fluffy_cornell_box_template.appleseed, is a modification of the default Cornell Box where the light has been cut into the ceiling, instead of being placed a few millimeters below it.

We also did the following adjustements on the scene before rendering:

This is it for this silly tool. Make sure to post your images on the forum!